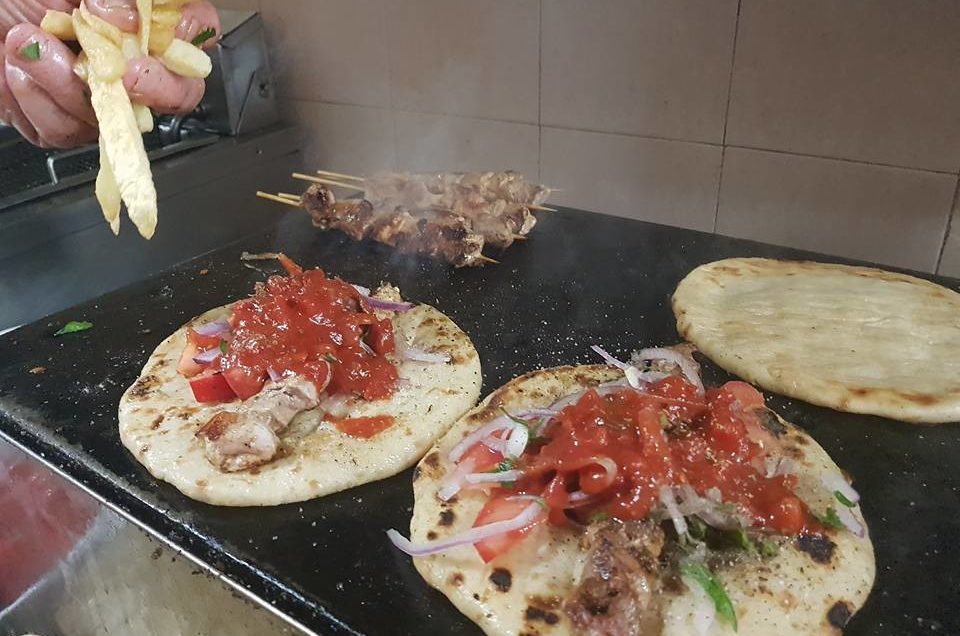 Greece has long been considered one of the premier destinations worldwide when it comes to street food, and for good reason. Due to our great culinary tradition, Greece offers a literal myriad of options for the street food aficionado, perhaps none of them more popular than souvlaki. The king of Greek street food and one of the most recognizable food items anywhere in the world, it sports a rich history which has led to its almost legendary status today.

Souvlaki is a skewer holding little cubes of meat, which can be pork, chicken, or even beef and lamb, or even cheese, mushrooms, and vegetables, traditionally grilled on a gridiron above the hot charcoal. The word souvlaki literally means “little skewer”, and archaeologic findings suggest that the ancient Greeks used skewers to cook meat on stone cooking supports before the 17th century BC, with similar items being also described in the works of Aristophanes, Xenophon, Aristotle, and others. In modern times, souvlaki in also mentioned by a French traveler in Boeotia in the mid-19th century, but it was not widely distributed in Greece until after World War II, probably in the 1960s, after being introduced by vendors in Boeotia. Between Turks and Greeks, souvlaki is the root of great dispute up until today, with both people claiming to be the ones who created it first.

Regardless, souvlaki enjoys widespread success today, with variations of it such as Gyro, Kebab, and others being found in most countries and have many loyal fans who feast on it multiple times a week. As for the many ways it can be served, you can order it on a plate or in a pita wrap, and it is usually accompanied by french fries, vegetables like tomato and onion, ketchup, mustard, mayonnaise and other condiments like the infamous tzatziki (the well-known Greek recipe of yoghurt, cucumber, garlic, vinegar and dill and one of its best friends! ), ktipiti (a hot feta cheese spread) and Russian salad, although one can get creative and add the vegetables, greens, and condiments of his liking. Such is the nature of this unique street food item: simple, easy to use, filling and full of flavor. It would not be an exaggeration to say that souvlaki unites street-food eaters around the world and has become a sort of Greece’s culinary symbol, which only contributes to its mythical reputation. Of course, Greece boasts the best souvlaki you will ever taste, so if you find yourself here, don’t miss out on it!