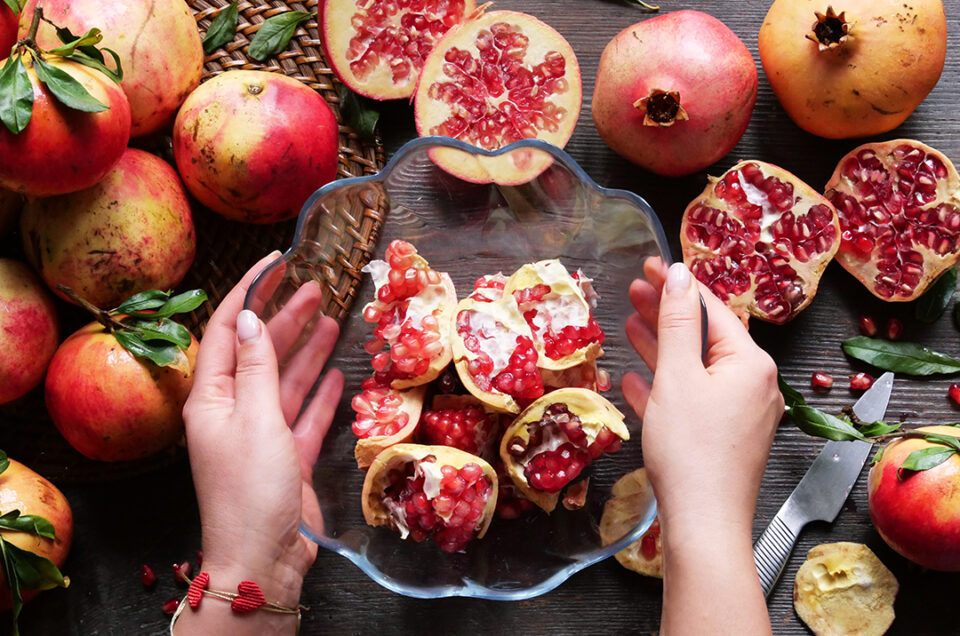 The Greek cuisine, honoring its ancient roots and its Mediterranean character, is no doubt amongst the world’s healthiest, thanks to its abundance in fresh fruit, vegetables, and herbs. It seems that the bright Mediterranean sun and the rich, bountiful Greek soil has never stopped providing for its people. So, today the spotlight is on one of these gifts of nature, the pomegranate.

Firstly, let’s look at its botanical facts. The pomegranate tree is a fruit-bearing deciduous shrub in the Lythraceae family and Punicoideae subfamily, growing between 5 and 10 m (16 and 33 ft) tall. As for the pomegranate fruit, it is a berry with seeds and pulp, produced from the ovary of a single flower. Its size lies somewhere between a lemon and a grapefruit being 5–12 cm (2– 4.5 in) in diameter and has a rounded shape with a thick, reddish husk.

Secondly, let us delve into its historical background. The pomegranate (or “rodi” in Greek) was not indigenous to Greece but was reportedly brought to Ancient Greece from somewhere in-between Persia and Central Asia; most likely India. Its cultivation precedes those of apricots and almonds, and is concurrent with the cultivation of olives, grapes and figs, leading it to be considered one of the original ingredients of Greek cuisine.

It was later distributed to the rest of Asia, Africa and the Mediterranean by Phoenician and Arab merchants until the Romans took it from Carthage and named it ‘Malum Punicum’, literally ‘Phoenician apple’, from which stems its name today, Punica Granatum. After that, it was introduced into Spanish America in the late 16th century and into California by Spanish settlers in 1769. Nowadays it is grown almost everywhere in the world.

There are several references of the pomegranate in Greek tradition and mythology with it being the symbol of the annual cycle of nature and fertility, and its seeds being the symbol of marriage. The great author Homer even mentioned it in his famous poem, The Odyssey. Some of these traditions have carried on to the present day, and pomegranate is now widely used in Greek marriages or on New Year’s Day to bring luck and prosperity.

Apart from its symbolic meaning, the pomegranate is widely used in modern Greek cooking. There are three main varieties of pomegranates; sweet, semi-sweet, and sour. Their seeds can be eaten or pressed into a juice which is then used in a variety of different ways: in cooking, as a juice or smoothie, as a garnishes or in alcoholic beverages such as cocktails and wine. Some notable Greek recipes including pomegranate are pomegranate liqueur and pomegranate jam.

Finally, to complement its delicious taste, the pomegranate is known to be one of the most beneficial fruits for our health. It sports various vitamins (A, B1, B2, C, and E) and minerals such as; iron, potassium, calcium and magnesium. It contains natural fiber and amino acids, and has a myriad of reported nutritional properties: It is a great anti-inflammatory, it helps against prostate and breast cancer, it lowers blood pressure and fights heart diseases, arthritis, and joint pain, while also boosting memory and exercise performance. Therefore, you would do well to introduce it in your diet, if you haven’t already, and while you’re at it, why not check out more of Greece’s culinary treasures!